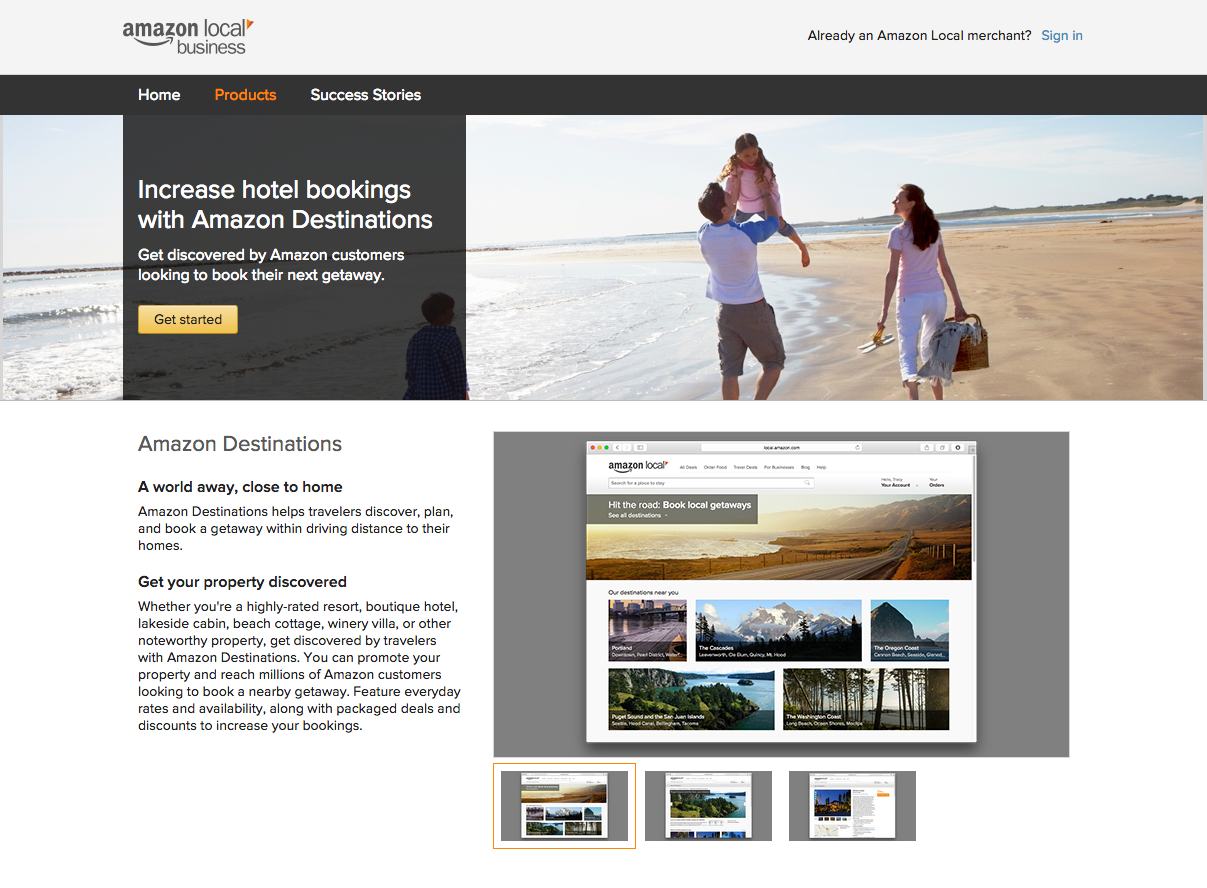 Much like the murky jungle of its namesake, Amazon remains a cryptic, enigmatic company on a trajectory as concealed and secretive as a trail through dense vines and underbrush. It is safe to say that those of us working in the digital space, and more specifically hotel marketing, have been waiting for Amazon to make some pretty seismic moves in the travel sector. Until today, what those moves were exactly remained shrouded in mystery. We were given a brief glimpse into the heart of darkness (only expanding on my metaphor here people) when the company rolled out hotel deals as part of Amazon Local, but as of today, we can finally see the beginning of a bigger picture. Rather than following the path of every new startup attempting to be bought out by an OTA and retire early, Amazon is blazing a new trail for itself by focusing solely on the “road-tripper” market. Amazon Destinations will provide visitors with hotels located within driving distance of larger metro areas along with dining resources and suggestions for activities. The new site will not, however, include search options for airfare, rental cars, or other forms of transportation. According to spokesman Tom Cooke, “More than 40% of all U.S. domestic leisure trips are short-term getaways of 1-3 nights, and many of these trips are to nearby, drivable destinations.” Cooke continued by saying, "However, travelers often have a hard time planning local getaways. It’s difficult to know where to go, the process is labor-intensive, and people often miss out on finding great places to stay.” The goal of Amazon Destinations is not to flood the consumer with endless options, but carefully curate a handful of hotels and resorts in designated markets that they can work with long-term. This is a clear departure from the deep discount model that the company had previously employed on Amazon Local. Participating hotels will also get to take advantage of Amazon’s review model, where customers can quickly and easily share details of their stay. This approach gives Amazon a much better chance at diversifying their inventory because they no longer are just working with properties who are willing to slash their prices. Destinations will feature a hotel’s advertised rate, but Amazon will skim a commission off of the top like any other OTA. Don't let the shiny new package fool you, Amazon is just positioning itself among the Expedias and Orbitz of the world. This is not revolutionary, at least not yet. Today's move is definitely not the complete picture, and we will be closely monitoring any new developments in the future. Currently, the service is only available in the New York, Seattle, and Los Angeles markets, but don’t expect it to stay that way. While Amazon declined to say if or when it was expanding Amazon Destinations to reach other U.S. metro areas, it would make sense for the company to do so in the future, assuming it finds traction with Amazon’s user base. For now, Amazon Destinations is housed under the larger Amazon Local brand, which still functions as Amazon’s Groupon competitor, offering a wide range of deals from various shops, restaurants, bars, clubs, and other online and offline properties. The new service is available both online and in the Amazon Local mobile app.