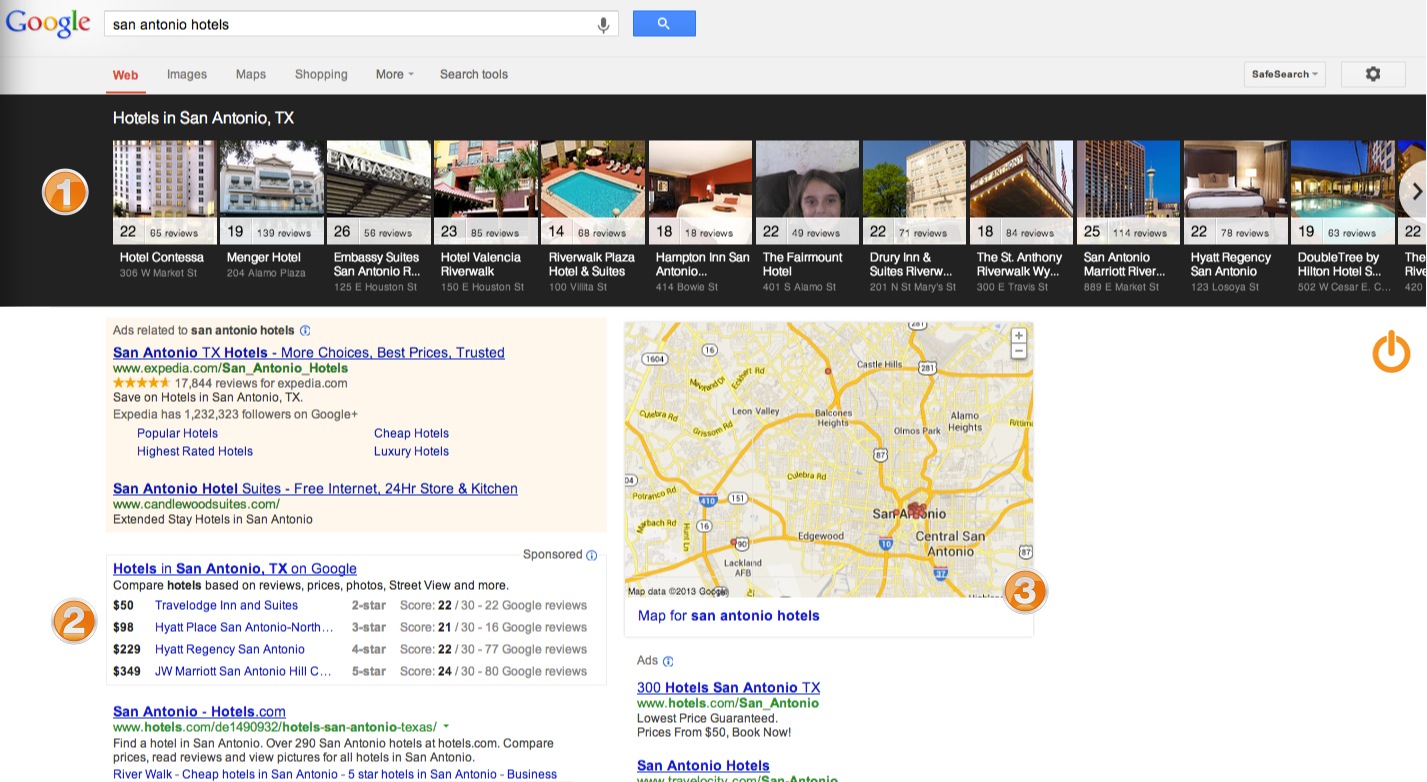 The Google Knowledge Graph carousel is now showing up more and more. And across a much wider variety of categories and verticals. Launched around 10 months ago, the new look definitely stands out more by giving more contrast to the images. The screen shot below is for results relating to hotels. While the carousel isn't new, it's updates and increased frequency aligns with their recent beta rollout of AdWords Image Extensions.This result for "san antonio hotels" in fact tells a more telling story for hospitality. Not only does the carousel appear (1), but local results have vanished. In addition still, expanded set of HotelFinder results appear directly underneath the top PPC ads (2). Then to add some further displacement at the top of the page, the map pushes down the side paid ads somewhat more. So now, organic placements start much further down the page. No sense at the minute on how frequently the new format is appearing but the resulting placements in the page and removal of "traditional" local SERPs will have an impact on traffic flow for those hotels happily taking their slice of traffic from this highly competitive search term and other geo-modified hotel and resort terms.

The image the carousel selects was from the photos uploaded to a Google Plus Local page but NOT the profile picture. No apparent rhyme nor reason why any image has been chosen. Point and case - look at the Fairmont result in the screen shot which has the photo of a girl on a sofa. It is on their their G+ local page, but er, not exactly fantastic.[caption id="attachment_1664" align="aligncenter" width="319"]

Not being able to define image used will be problematic.[/caption]To get a side-by-side comparison of just how different the results looks using carousel and not, take a look at these screen shots. Note the enlarged map in carousel version pushing right hand side paid ads further down. Again, the lack of the local pack in results between the two and how the local pack is reflected in the carousel.

The Fear is that Google will eventually start working in HotelFinder results into the carousel. Making it less "knowledge" based and more yield/revenue based. This bias in results on front page SERPs isn't good for the vertical. It would push legit organic rankings down into traditional result formats and effectively trick users into HotelFinder where Google and the OTAs win for the most part. The issue with HotelFinder results at the minute, is most people seem to think they are based on centroids and pricing. It's not. Results are heavily weighted to yield opportunity in combination with other elements. Don't be fooled into thinking it's a fair game in that sandpit, it's a knife fight.So what do you think? Seen these results around much?Will this be a good change for users?