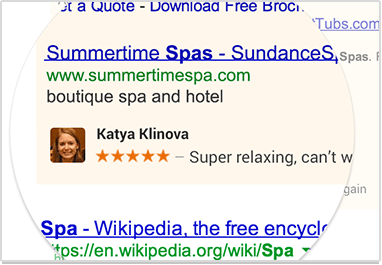 The link between your Adwords account and Google Plus local page just got more important. Previously we've just seen the number of followers shown in ads. For example:

The next step Google is taking is to allow more than just these +1 numbers. They will be including actual reviews from consumers that have left them on Google Plus local page. The name for this new service is "Shared Endorsements" and the screen shot Google is sharing with the industry right now is this one:

Previously all Google said advertisers needed to do to add the +1 information to their ads was to ensure the social extension was completed, the page had 100+ followers and had regular quality updates (More information on that here). No word on whether this will remain for the new "shared endorsements" or which endorsements will appear. Of course most pages have a mixture of good and bad reviews and advertisers aren't likely to want to pay to show bad reviews off to the world. We'd assume Google are only going to include 4 or 5 star reviews though.Consumers and reviewers themselves have been given the option to opt-out of this service so their comments cannot appear in ads. If thats something that bothers you then just head here and check the tick box. Personally this isn't something I really care about but good job Google for learning from Facebooks mistakes!The terms and conditions changes that include this for Google plus won't be coming until mid November so we don't expect to see the new ads running until then at the earliest. We'd also recommend keeping an eye on the Google Social Ad Innovations page for changes in the near future and the Screen Pilot Blog as we learn more.