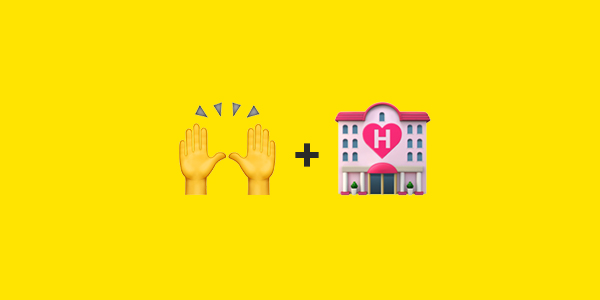 Emoji seems to be the communication medium de jour, literally and figuratively. If you need evidence of this beyond your own texts and timelines, consider that this past July 17 marked the fourth celebration of World Emoji Day, or the coming theatrical release of The Emoji Movie, a full-length, animated feature about the adventures of anthropomorphic emoji (with Patrick Stewart in the role of the poo emoji, no less).The growing trend seems to be less a war on words than an organic adaptation of our mobile, quick-scroll society.Some 92% of all internet users report integrating emoji into everyday communication. When it comes to integrating emoji in marketing, however, the stakes are significantly higher.Major hospitality brands are leveraging planes, palms and other colorful icons to help their tweets pop and subject lines entice. Some industry players have taken it to the extreme. Aloft introduced an emoji-only room service menu. The Priceline Group’s KAYAK brand recently introduced emoji-based search.[caption id="attachment_4885" align="alignright" width="400"]

In 2015, Aloft rolled out its emoji-only room service menu. (Courtesy Aloft)[/caption]These examples, however, are more notable for their novelty than their utility. On a practical level, numerous studies have shown the strategic use emoji to increase engagement and open rates with push notifications. Exactly how much of a boost is a bit unclear. Some studies show a bump of around 5%, others note spikes of 95% or more.Don’t take the stats as gospel. Use them as guideposts.The clear pattern seems to be that the integration of emoji holds potential.Think it’s time to work emoji into your hotel messaging strategy? Here are six things to consider.

Emoji in marketing is a relatively new phenomenon. There may be pushback from senior team members or brand managers. But like any other fresh tactic, the goal is to stand out. It’s OK to try new things.

The emoji is literally a lesson in “less is more.”

Keep it simple; a smile, an island, clapping hands. One of the best performing emoji for boosting email open rate is a simple heart.

Some 58% of respondents to a recent survey said they felt brands are trying too hard when using emoji in advertising or corporate communications.

Don’t overload your messages. There are many bloated brand fails to be learned from.

The basic tenants of marketing still apply. Clear and concise communication is the goal.

Emoji can be a fun, light way to connect with travelers, but be sure to stay clear and relevant.

Fortunately there are a wealth of common travel-related emoji to experiment with, from snowflakes and sunshine, to planes, trains and automobiles.

Emoji render differently across devices platforms. Something as straightforward as a grinning face looks different on Twitter than it does on Facebook, and different yet again on an Android platform verses Apple's iOS. You can see some examples here.

To avoid being misinterpreted, consider sticking with standard, mainstream emoji.

Be really, really sure you understand what your emoji represents

While, indeed, sometimes a cigar is just a cigar, things can be ambiguous in the emoji realm.

While the majority of travel-related emoji are pretty safe, there’s a great many fruit, vegetable and hand gesture emoji that hold suggestive meaning in pop culture well beyond their original intended use.

Do your research, and avoid the use of emoji that may be misinterpreted, or worse, offend.

Keep perspective. Don’t expect an image to double your open rate on its own. Engagement is influenced by a huge range of factors including the timing, frequency, and relevance.

Use A/B testing with email subject lines to see which emjoi – if any – boost open rates. Most mainstream email marketing platforms make this simple to do. Test and retest.

Note, at least one recent study cautions that consumers may now be showing signs of emjoi fatigue. The key to success is to find what resonates with your particular audience. As always, marketing teams should feel free to lean on their trusted digital marketing partner to help guide them through their campaigns.For more insight on the role of emoji in the broader spectrum of hospitality social media marketing, check out our recent post here.