LIVE FROM THE LOBBY: The Future of Hotels and Live Broadcast 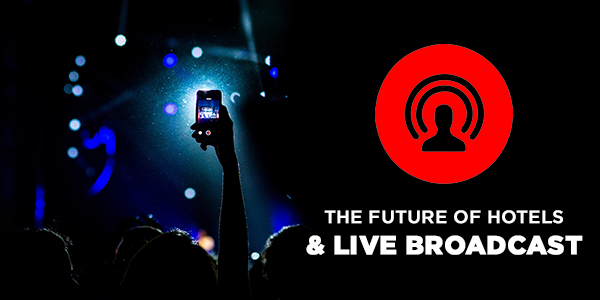 Live streaming seems poised for its breakout year, with brands beginning to craft live content in earnest. Until now, though marketing teams have had access to live-streaming applications for a few years, none have exactly sparked a broadcast revolution.Pioneering app Meerkat recently folded, Periscope seems to be on life support. Twitter, which owns Periscope, recently introduced the ability to broadcast live from the Twitter app itself, as did Instagram (which is owned by Facebook).What's now seems set to thrust live video into the mainstream is the maturation of Facebook Live.

As with everything Facebook, what the platform brings to the table is potential reach. The social media behemoth now boasts 1.86 billion monthly active users, dwarfing Twitter’s 317 million active monthly users, and Periscope’s 10 million registered accounts. Facebook, however, is offering more than just an audience.In testing since late 2015, Facebook Live became available to all users last April, and tweaks and enhancements since have made it an increasingly attractive communication channel for marketers. Notably, it's currently the only platform that lets users archive live videos after their original broadcast, but there are also push notifications to alert followers when a user goes live, and even picture-in-picture-style viewing that allows users to simultaneously scroll their newsfeed and stream live content. Other carrots for marketers include algorithm perks such as broadcasts appearing high in a follower’s news feed when live.Plus, Mark Zuckerberg really, really wants you to use Facebook Live.The company CEO has publicly proclaimed that Facebook is "all-in" on video, including live, with the stated vision of transitioning Facebook from a "mobile-first" platform to a "video-first" one. Further, Facebook is putting its money where its mouth is, rolling out one of its first traditional advertising campaigns late last year (TV spots, billboards and busses) exclusively to promote Facebook Live, and paying a cool $50 million to media companies and influencers to produce live content. It's even rumored that Facebook is working toward creating its own original content.For their part, the biggest brands appear willing to comply. Videos have now overtaken photos as the most popular type of post from the top 30 brands on Facebook.Facebook’s long-term goal, of course, is to grow its ad base, capturing dollars currently allocated for "television." According to one research firm, video streaming could be a $70 billion industry by 2021.For now, however, Facebook Live is commercial free and available for anyone bold enough to tap that little red camera icon.

Thus far, beauty and auto brands have lead the live streaming charge, though other industries are beginning to experiment, including travel. Facebook is a proven channel for trip inspiration, with one recent survey noting 53 percent of respondents found ideas for their most recent trip on the social channel. With inspiration in mind, UK tour operator Virgin Holidays live streamed vacationing Brits on terrestrial TV and Facebook Live simultaneously this winter, part of its “Seize the Holiday” campaign.Other travel brands getting in on the act include industry disrupter Airbnb, who last year incorporated Facebook Live in a promotion with Disney, streamed live from Yellowstone, and in January made its first foray into original live content with visits to homes in London and Kauai, Hawaii.Hotels, by and large, seem unsure how to wade into the live stream. In September, Four Seasons Hotels & Resorts used Facebook Live to give a tour of its private luxury jet, and back in 2015, Hilton broadcast its Hilton@Play concert series live via Periscope, though that was arguably less about bookings and more about building brand loyalty and courting younger travelers.The generational appeal of live content is worth noting. The brands that ultimately win at live streaming, as predicted in digital intelligence firm L2’s Intelligence Report: Social Platforms 2017, will be those that use live video to appeal to Millennials who crave interactive, real-time, and reality content.

As hotel management teams seek innovative ways to engage online and personalize the conversation, broadcast via Facebook Live seems ready-made for exploration. Unlike the massive economic and technologic entry barriers of integrating innovations in artificial intelligence, virtual reality or chat bots, Facebook Live is a storytelling tool that can essentially be used immediately by any property.Most hotels already maintain an active presence on Facebook, eliminating the curve of learning a new platform. Many marketing teams are already adept at visual storytelling, including the production of recorded videos with social sharing in mind. There’s essentially no monetary barrier, affording even properties with modest budgets a relatively level playing field and an opportunity to stand out in the live-streaming space, much the way many boutique hotels did as early adopters of Instagram.Facebook Live videos currently only make up about three percent of total Facebook videos, but they appear to drive significant engagement. While Facebook has yet to officially share viewership totals, the company recently remarked that the volume of live broadcasts have quadrupled since May, and garner ten times more comments than a regular video.Most importantly, for the vast majority of hotels, there's no need to draft a new story.Properties are already actively promoting their guest experience, their history, and their community via digital channels. They're already drafting formal press announcements in hopes of earned media exposure. Sharing those existing stories via Facebook Live simply requires a repackaging for the unique format.No doubt, putting the power of live video in the hands of the masses can be unpredictable. Some brands will err. Storytelling will need to evolve. But as live video goes mainstream, it's time for hotels to consider how they can leverage the new tool to share their story.